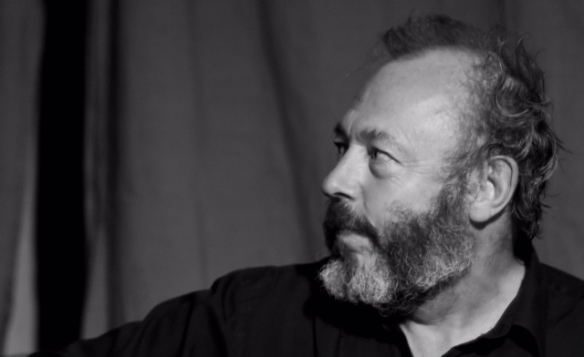 For this concert, part of a new collaboration between Liverpool-based multimedia composer and turntablist Philip Jeck, and The Merseyside Improvisors Orchestra, Jeck’s manipulated vinyl soundscapes will be mixed with the sounds of the live ensemble.

Philip Jeck has created a truly original sound of other worldly looped drones and pulsating rhythms. His largest work Vinyl Requiem, made with Lol Sargent, was for 180 record-players, 9 slide-projectors and 2 16mm movie-projectors and received a Time Out Performance Award.

Jeck studied visual arts at Dartington College of Arts in the 1970s and has been creating sound with record-players since the early 80’s. He has worked with many dance and theatre companies and played with musicians /composers such as Jah Wobble, Steve Lacy, Gavin Bryars, Jaki Liebezeit, David Sylvian, Sidsel Endresen and Bernhard Lang. He has released 12 solo albums, the most recent Iklectik, a live recording on the Touch label. Suite, a vinyl only release, won a Distinction at The Prix Ars Electronica, and a cassette only release on Tapeworm, Spool, was performed only on bass guitar. His CD Sand (2008) was 2nd in The Wire’s top 50 of the year. Vinyl Coda I-III, a commission from Bavarian Radio in 1999 won the Karl Sczuka Foderpreis for Radio Art.

In 2009 he received The Paul Hamlyn Composers award. He has also toured in an Opera North production playing live to the silent movie Pandora’s Box (composed by Hildur Gudnadottir and Johann Johannson). He has also worked again with Gavin Bryars on a composition Pneuma for a ballet choreographed by Carolyn Carlson for The Opera de Bordeaux and has recently made and performed the sound for The Ballad of Ray & Julie at the Everyman Theatre, Liverpool.

The Merseyside Improvisers Orchestra is a new orchestra based in Liverpool made up of musicians and dancers. The orchestra is dedicated to spontaneous music making, playing free and conducted improvisations. They also play experimental and open form compositions from their members and other composers such as George Lewis, Jennifer Walshe, Will Redman and Christian Wolff. Since forming they’ve collaborated with some of the most prodigious experimental and improvising musicians of today like, Maggie Nicols, Trevor Watts, Veryan Weston, David Leahy and Paloma Carrasco.

The Orchestra was formed in 2016 by Ged Barry and is the meeting place for Merseyside’s adventurous, creative, musicians. They enchant audiences with their spontaneous and written compositions and their music takes listeners on a journey with mesmorizing group interaction, atmospheric textures and loops. Since forming they’ve played over 20 concerts and in the Open Circuit festival and at The Tate Liverpool.